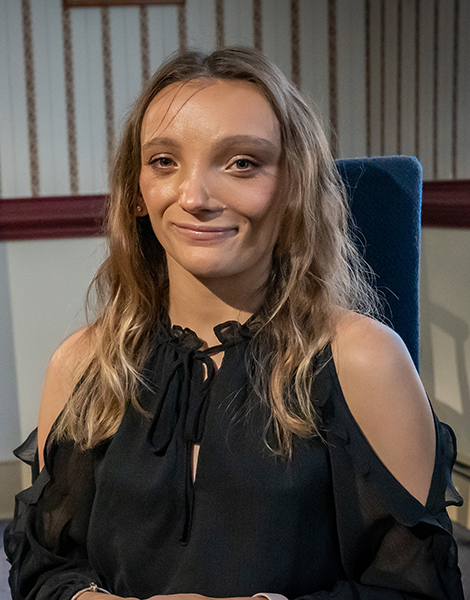 Chrystal was diagnosed with McCune-Albright syndrome when she was 22 months old. The disease causes polyostotic fibrous dysplasia, which is scar-like tissue in the bones. Nugent-Hicks moved to Charles Town with her family when she was 11-years-old. As a senior at Washington High School, she was referred to DRS for vocational assistance to help her transition from high school to postsecondary education.
Rehabilitation Counselor Ann Ramos explained that DRS worked with Chrystal to help her learn about different types of jobs, how much they paid and whether there were available opportunities in her location, and DRS also helped with college financial assistance.
After graduating in 2015, Chrystal went on to attend Blue Ridge Community and Technical College, where she originally pursued cyber security and then changed to business administration. It wasn't until she took a business law class that Chrystal found her passion. She enjoyed the class so much that she switched to the paralegal program.
Chrystal earned her associate degree in 2019 with a 3.8 grade point average despite taking time off for several surgeries in the process.
Her job search was not easy. She submitted many applications, but her biggest challenge was job interviews. A big part of the interview process is the handshake, which was awkward for her because of her crutches, and she feels that employers concluded that she was not suited for jobs that would require her to do things like carry heavy files to a copier machine.
However, Chrystal continued her search and ultimately was hired as a legal assistant by Winchester Law Group in Virginia.
According to Ramos, Chrystal found her job on her own, and Ramos could not be more pleased with Chrystal's accomplishments despite the obstacles she faced due to her disability.
Beth Coyne, a partner with the law firm, described the firm as small, with only four attorneys. They represent local social service departments. Chrystal was interviewed by Coyne, as well as the firm's office manager and the individual that she would ultimately replace. All three believed that Chrystal would be a good fit for the job.
Coyne explained that Chrystal stood out in the interview because of her enthusiasm about the job opportunity, and her enthusiasm became contagious. They had interviewed several people who had worked in bigger law firms, and they seemed to have predetermined ideas about how things should work.
Chrystal started the job as a blank slate. Coyne described Chrystal as eager, organized, willing to learn new things, open to constructive feedback, positive and extremely happy to be in the job.
According to Coyne, Chrystal is responsible for processing all documents and paperwork, including legal pleadings and filings, related to the representation of their clients. Coyne has been practicing law for 35 years, which makes her appreciate Chrystal's knowledge of social media and technology because they have added additional complexities to her field in the last several years.
Chrystal loves her job, her employer, and being able to use her organizational skills. During college, she did an internship with the Jefferson County prosecuting attorney's office, and she believes it helped to prepare her for the job with Winchester Group because she dealt with different legal documents and was able to get a feel for the environment.
Chrystal is grateful to her family, especially her sister and her mom, as well as her friends for being such an incredible support system to her.
Chrystal is proud of her accomplishments. She worked hard to earn them, and she appreciates the chance she has been given to prove herself.
"It was really important for me to get the job because I saw things in myself, and I wanted other people to see them," said Chrystal. "I'm so determined, and I wanted people to see that."

Due to the COVID-19 pandemic, DRS was unable to hold its annual Ability Works Recognition Ceremony in 2021. However, DRS honored six hard-working West Virginians for exemplary vocational rehabilitation.